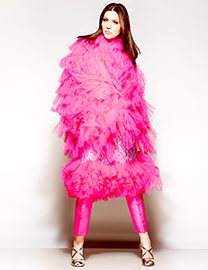 Angela Papadopoulos-Fortune is a visionary designer, fashion stylist and consultant whose signature design and styling is in the innovative use of colours and shapes, together with crossbreeding looks and details in a highly conceptual and holistic manner.

Angela was born in Greece and grew up in Australia. She graduated from her first Fashion Design Course in Sydney then moved to Paris for a second Fashion Design Course at the infamous Ecole Berçot. She has recently completed her MBA in Fashion Business at IFA- International Fashion Academy, in Paris and Shanghai.

Angela has international experience gained from working in the fashion industry in freelance design and styling, modelling and consulting for various brands while living in France, Britain, Australia, Japan, Germany, Austria, Japan, Switzerland, Russia, Lebanon, Greece, UAE and Qatar. She has also been involved in the presentations of various designer collections during their respective Fashion Weeks in some of these countries and also lectured at prestigious design schools in London, Tokyo, Sydney and Athens.

Angela has consulted and styled for many international advertising campaigns for luxury designer department stores such as Harvey Nicols, Saks Fifth Avenue/Burjuman, Tanagra in Dubai, Schöps in Vienna and Aishti in Lebanon.  The Beau Rivage Luxury Hotel in Switzerland, British Airways, American Express, UTS (telecom) in Germany, Klassen Lotterie in Vienna, Luxury Real-Estate advertising campaigns such as Emaar Group, Jumeirah Marina and Al Barari as well as styled and written articles for various publications L’Officiel, Jalouse, Viva, Carnet, Zoot to name a few. Other consulting projects have been on the acquisition of certain luxury brands for potential investors.

At the moment Angela is sourcing material for a future book on fashion from her unique global viewpoint.